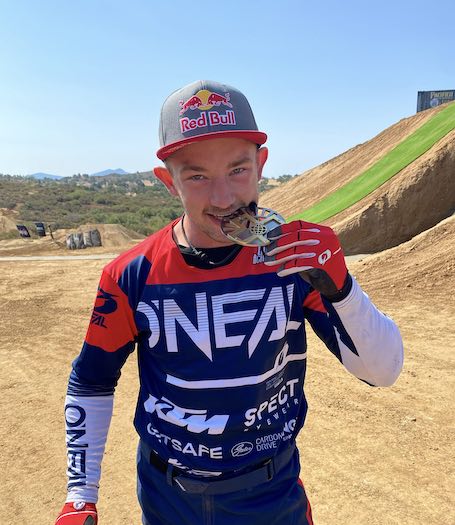 Luc Ackermann is the youngest FIM Freestyle Motocross World Champion and nine-time world record holder. Now the German extreme athlete has been able to fulfill another dream. On Thursday, the 23-year-old from Thuringia (Niederdorla) won gold at the renowned X Games in the USA in the freestyle motocross competition.

The X Games, referred to by many as the Olympic Games for extreme athletes, are organized annually by the American US sports broadcaster ESPN. This year, due to the pandemic, the freestyle motocross competitions were not held at US Bank Stadium in Minneapolis, but closed to spectators at Axell Hodges‘ FMX Park in Ramona, California. The fact that no fans could cheer for the athletes this time didn’t impress Luc. In his very first freestyle run, the German performed a Seatgrab Indy Backflip in 75 seconds, followed by the flattest 360 in FMX sport worldwide. After a tsunami flip, Luc did the first double backflip, followed by a flair (540) over the quarter pipe ramp. After a double nac nac double flip, he jumped another cliffhanger and ended his extremely clean, spectacular run with a massive holygrab. He not only impressed the judges, who put him at the top of the field with 92.33 points, but also seemed to have made an impression on the competition.

The favorite Australians around Jackson Strong, Josh Sheehan and Rob Adelberg all had mistakes in their runs. Josh Sheehan was able to win the silver medal with his tricks, Rob Adelberg came in third with three frontlip combos. Luc Ackermann was the first German FMX athlete to win a medal at the X Games in the freestyle motocross competitions. And it also shone in gold. What an incredible success story.

„I’m super happy. Winning a medal at the X Games has always been a dream of mine. We never expected to get them here in the first competition after 1.5 years. Thanks to my girlfriend and family, my sponsors, my friends, my manager and everyone who has supported me over the years,” said Luc Ackermann after his run, when he was given the gold medal.

Berlin based
Management, Booking and PR Agency
for Extreme Sports Athletes
About us